Good robot broken robot!
Enemy combat robots is not an obstacle for a commander like you!

Assemble your team, equip them and save the fighters from this treacherous planet!
This is a tactical shooter for the real commanders who like battles, lots of weapons, interesting robotic enemies, huge bosses, explosions and riding on the tank, show these robots who's boss!

Now in game there are 7 types of soldiers which you can gather your team from 1 to 3 fighters. Each soldier may have different weapons and skills.

On the planet of robots you will meet incredible robots-creatures, from small Robo-bugs to huge mechanical monsters, they do not like living people and will try to destroy you. To successfully fight an enemy, use your team of soldiers and available skills.GAME FEATURES:

The option to play either as a strategy to controlling the soldiers, or to participate in the battle one of the soldiers.
The game has over 40 unique enemies and bosses.
Many robots getting damaged gradually destroyed and you can see the mechanical insides.
7 persistent soldiers to your squad.
10 skills which are very helpful in battle, for example - energoschit gives the soldier for a while absolutely inviolable.
The opportunity to discover new weapons for your fighters or improving the existing ones.
Additional bonuses in the game: life, double damage and more.
ABOUT ROBOTS:
I tried to make a lot of interesting and varied opponents and I think I have made it.
After destruction of robot to each soldier is given points, which replenishes the condition of his "skill". Defeated robot remains bonuses - the stronger the robot, the more bonuses remained.ABOUT SKILLS:
Skills are very important for use: without them the game is not passable. In the beginning, many people makes mistake by trying to pass through game using own dexterity and without using game "skills". Robots love such newbies)).

The game has three main skills and one for each type of soldier.MAIN SKILLS:

- "freezes" all the robots in a specified area for a few seconds;
- creates energy shield around soldier, making unit completely untouchable;
- call for bot that will land and help soldiers on the battlefield.
SOLDIERS DESCRIPTION:

Johnnie excels in all areas of combat on the battlefield and can use four different weapons and has two different skills.
Johnnies weapons:
- The Basic Pistol is a standard Pistol issued by the 2050 Army and is used for Close Range Combat and for special situations such as Retreating.

- Blast through Enemy Robots with Johnnies personal Assault Rifle that deals Medium Damage and can target Enemies from Medium to Long Range. Johnnie has the ability to upgrade the Assault Rifles Damage after accumulating experience.


Johnnies skils:
-Johnnie has the ability to toss a grenade near enemies that explodes and deals Medium Damage.

Beatrix is a Expert Sniper and packs a serious bang with each shot!
"They never see me before I destory them, it is funny!" - Beatrix
Beatrix weapons:
The submachine guns used for Close Range Combat .

Nina is a trained soldier but dedicates her time healing wounded Soldiers.
"I'll heal my team, then i'll destory the enemy." - Nina
Nina weapons:
A Good Rifle that allows you to shoot at enemies from a Far Distance.
Cons: low rate of fire.
Upgrades:Damage, Magazine.


Nina skils:
Healing - Restores the standard of living in most wounded Soldiers.

Misha moves slow but he rips apart Enemies with his Heavy Weapons and Heavy Armor.
"I am a One Man Army, but I enjoy the company." - Misha
Misha weapons:
Heavy Machine Gun - Heavy machine gun deals Good Damage and has a Large Magazine.
Cons: Slow Reload.
Upgrades: Range, Magazine.


Electro skils:
Lightning Stream - Produces a stream of Electrical Discharges that deals Great Damage to near by Enemies.


Kurt - The soldier moves very fast and jumps high.
If his laser sword is fully charged it does great damage.
Electro weapons:
Laser sword, capable of accumulating energy and causes more severe damage. The damage is doubled if the strike of the sword was during the jump.
Cons: Slow Reload.
Upgrades: Damage.


Electro skils:
Explosive strike deals heavy damage to all enemies nearby with Kurt.
ABOUT BONUSES:

- replenishes health: the larger the size the more will be added;
- replenishes the level of main skills;
- gives double health;
- increases damage by two times;
- opens up new weapons for the fighter: if not, then gives a bonus to current weapon.


Perks for the weapons increase one of the properties, if the property is available for increase or has not reached a limit. For example ammount if damage done.

-damage
-range
-rate
-ammo
STORY:
Planet of the robots attacked the spaceship of earthlings, to eliminate the threats were sent a squad of starship troopers, 7 persistent and armed soldiers, robots have attacked and blown up their ship but the soldiers managed to escape.
Your task as commander of the squad and using their weapons and skills to defeat the evil robots and hostile mechanisms.
Your skills in tactics and strategy will help to win over military robots, soldiers can be swapped by dragging them around the screen and you yourself decide which fighter will stand in front, right, use skills, for example, before to launch missiles at the robot it is better to freeze it so he couldn't move.HOW TO PLAY


Tactical mode - control a squad with only the mouse by issuing commands for movement and the soldiers are fighting on their own. In the meantime you help them by using their fighting skills. For example, the skill "electroshock" completely stops the robots at the area.
Direct control -you become one of soldiers and control unit in a classic way "WASD + mouse" and the other soldiers will follow you and help in battle.

Please don't try to beat the game without using skills, you will not succeed! For convenience, use the keys skills Q,E,F,Z,X,C. 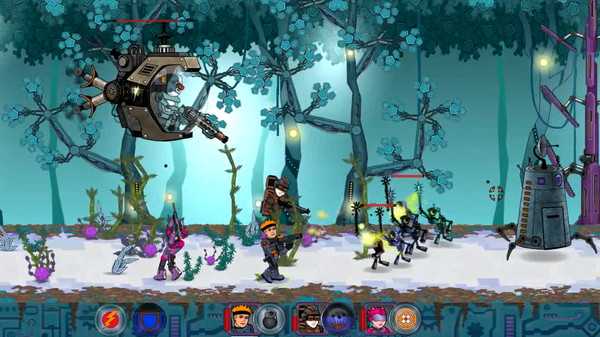 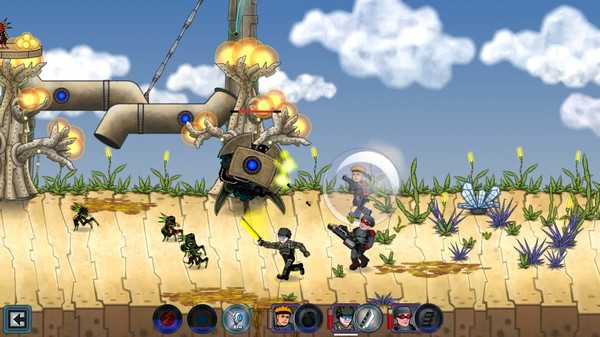 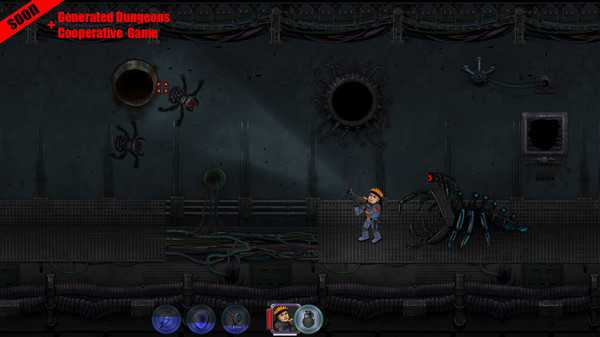 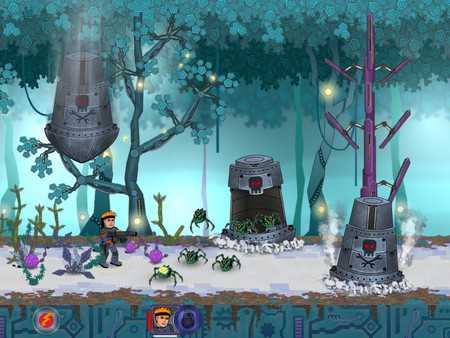 "Planet R-12" is a 2D tactical shooter. Your squad of persistent soldiers accidently landed on a planet of robots, populated by hostile mechanisms and war machines. Each step on a planet is full of dangers and soldiers really need your skills and abilitie Got this key before launch?
This shooter game is fun, and truly needs tactic, you can\'t win just with rushing.
Deserved for more players. An interesting 2-D plat-former. Slow at the start but gets better as you collect parts to upgrade your weapons and earn new teammates. I like it it is a fun idea i think. I play a lot of indie games like this but still found it refreshing